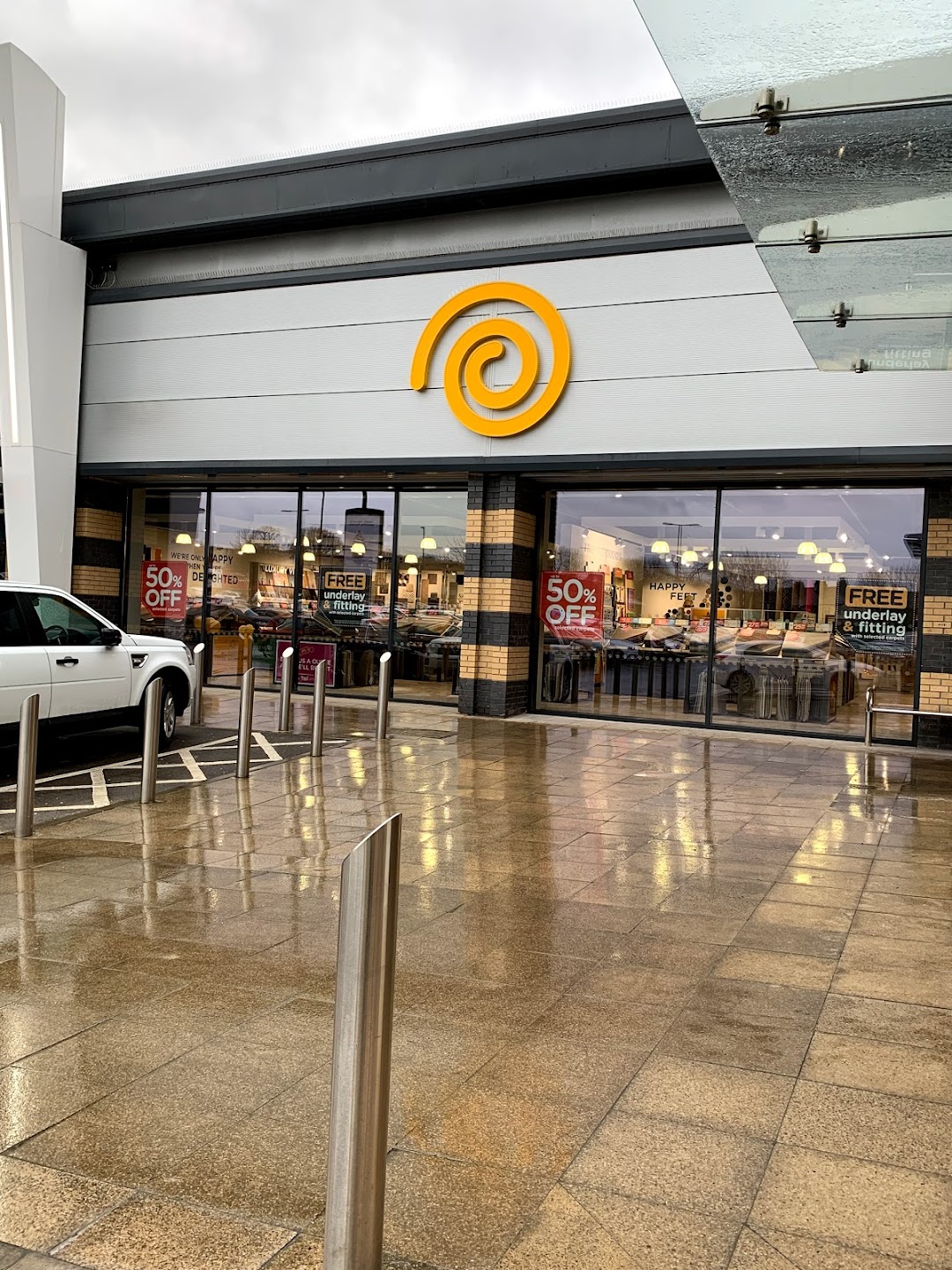 Best experience from staff at guiseley store from beginning to end, moment i stepped in didnt know there would be that many carptets and types to choose from. But the staff made it that easy they sat me down made me coffee while we were negotiating and in the end they got me the best carpet for my lounge and bedroom. From choosing to fitting 100% going to let my friends and family know about tapi carpets thank you to the staff at guiseley.😁

Perfect service from the guiseley store, came in as it was raining. The carpets caught my eye and i just had to have a look. Staff were very welcoming. I spoke to the gentlemen handling admin and the other colleagues, and they just changed my mind to getting the best carpets ever. Was thinking of going to carpet right but im glad i changed my mind because my carpets are amazing. Thank you tapi.

The store is nice and tidy with helpful friendly staff. Carpet was fitted within 2 weeks of order and the job was left clean and tidy. I will use next time I need some carpet.

Horrendous customer service from Tapi in a whole. No aftercare. Swore at by the fitters from Sheffield. Terrible fitting. Charged for items I never received. Taken to the Ombudsman and refunded part of the order as Tapi wouldnt admit they were wrong! Avoid and use a decent company

Absolutely shocking customer service at the Guiseley store. The chap with dark hair and in his late 30s needs to get out of any customer facing role. Appalling, clearly was not interested in anything, didnt know anything and unbelievably told us probably best to go back to where we bought our other carpets!!! Didnt even attempt to sell us a carpet, show us anything...lazy beyond belief. Dont waste your time going here. We bought our stairway, hallway and landing carpet elsewhere.....as we were advised to do by Mr Cant be Bothered.

Fantastic service from all the guys in this store they leave you to have a loo round but are there to help when needed no pressure at all! andlots to pick from1 will be back and would recommend to anyone

Update8/3/19. Store is now open . There are several disabled parking bays in the retail park and pavement access all the way round . There are upright barriers separating vehicles from the pavement meaning wheelchair customers with cars will unload into passing traffic in the car park .Access to the store itself is all flat and level throughout . The main entrance doors slide open automatically . I checked with the staff regarding my posting and they were very helpful . I was left to explore the store and had no problems in any areas . There is plenty of room to move around .All the rolls of carpets that were in store were lined up against the walls regimentally and very neat .Staff are on hand to deal with customers requirements , and there are two separate very comfortable seating areas for them to do this .Disabled customers I think will need help with carpet swatches as I had to sit sideways on to flip them over . Not a criticism it’s the design and the height and the weight !!There are no public restrooms or disabled toilets in the store, but it sure smells nice 👍.

AVOID AT ALL COSTSNot even worthy of a one star review, disgusting service.Where do we start. Ordered a carpet for our babies nursery (small room) my partner took unpaid leave for the date it was due. We got a phone call the day before it was due to be delivered to say it was damaged and they would be sending it back- fair enough. Partner went to work as normal. We were told they would contact us with another date that it was due in, guess what- no phone call, we had to chase them, to be told they cant get hold of anyone to find out and would ring when they did.A week later we had an email to say it would be delivered into store in 3 weeks. Great ha wrong. Yet another call to say it hadnt arrived. Another two times after this we were given a delivery date and then told it wasnt coming. My partner took a total of 3 days unpaid leave to stay in for a delivery to be told they dont know whats going on.Then to be told my a member of staff that they would pay for the fitting cost of £51 (which tapi carpets havent even paid for it was their supplier that did) and told we could get compensation for all this messing around. After almost 11 weeks of waiting for this carpet to be delivered finally we had a date, however my partner couldnt take anymore time off and said could they deliver after 1:30 as this was the earliest he could leave, and guess what the fitter rang at 11am to say he was on his way and hadnt received any information from tapi carpets to say a specific time. A day later still no carpet as the fitter went to another job!No compensation or anything from this company. You really have taken the joy out of creating our babys nursery. DO NOT BUY FROM THESE we are beyond upset

Horrendous service from Tapi Guiseley store. Dont even know where to start as been messed about so much. 5x fitters been out to fit a carpet in one room (Nursery) x2 times fit the wrong underlay. Not to add that we waited in all day/eve of 3 occasions for a fitter to turn up and never did. Then we were told something was wrong with the actual carpet as it was making a crinkly noise when walking over it. Had to wait 3 weeks for a new carpet. We were hoping today it would have been right and wouldnt need to supervise and check on them. YET again, wrong underlay fitted and we have just realised that the same carpet has been relayed as noticed furniture marks in it. So where is the new carpet you ordered Tapi? And why have we waited 3 weeks for a new carpet which hasnt even been fitted?! I am wanting to be refunded for this room due to the amount of time we have wasted waiting around for fitters, changing shifts to be in, unable to build nursery furniture and get this room ready. We have a baby on the way in less than 6 weeks and this should have been sorted at the end of March. This has been an extremely stressful experience for us this needs to be sorted asap please.

My daughter who is heavily pregnant has had nothing but trouble with the company since March. It has taken 5 attempts to carpet the nursery & it is still not right. The manager at the store will not accept anycalls responsibility or even apologise for the incompetence. SHAME ON YOU!!! they gave caused my daughter & her partner untold stress, changing shifts to be at home & no one turning up etc. Carpet fitters rude etc. Disgusting service.!!!

Avoid at all costs !!!This company take your money and then mess you about...We were told carpets would be fitted on such a date and then we receive an email on the day of fitting to be told we are unable to fit them now .Also told at the time of fitting the carpets a joiner will adjust the doors .. now we are told this sint the case ,they can arrange a joiner but it will cost more then we were quoted

Great quality carpets and other flooring and the staff are very friendly, polite and helpful. Will use again in the future and recommend to friends and family.

Lovely shop, great service, good staff, reasonable prices too. Didnt like the air freshener smell but that was just me I think.

Very helpful lovey store thank you jonathan for your service.

Big shop full of carpets. Eye-catching offers on carpet but linked to overpriced underlay and fitting.