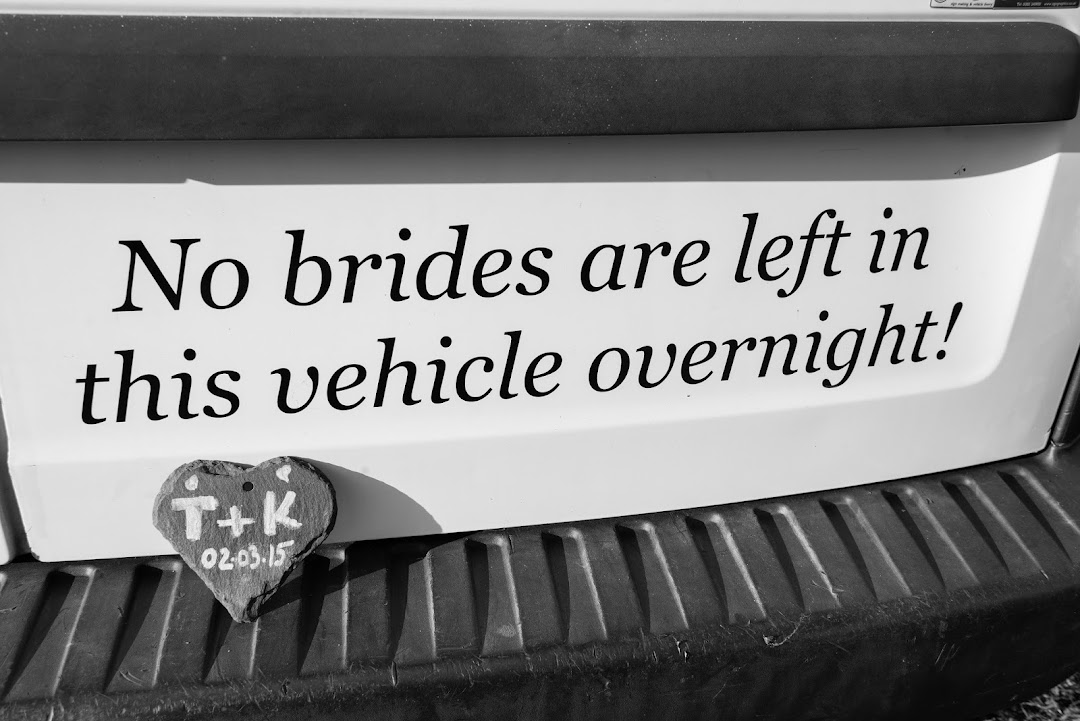 I had my wedding dress altered by Tracey and the service was fantastic!Tracey was lovely and bent over backwards to get my dress finished on time and just how I wanted it. I fully recommend 100%

Tracy altered by wedding dress, my sisters bridesmaid dress and hemmed my brothers trousers. The experience was so chilled and lovely, Tracy and her team are all so kind and sweet. One day I had completely forgotten about my appointment, Tracy was so kind and said there was still time for me to go down and get my dress fitted. I appreciated this so much and it is part of the reason I recommend her so strongly. It was so lovely seeing this baggy dress be altered to fit perfectly. Everything that they did was done to perfection, they even suggested putting a button so I could hitch up my train at the end of the night to avoid getting trodden on. If you want a garment made or altered by genuinely kind and lovely people then defiantly pick Acula Creations.

The following photos should be enough to show Aculas substandard alteration work - shortening hem and lifting shoulders - but it was the way Tracy handled the situation that warrants this warning to other brides.I went back to Acula after the wedding re: the uneven lace (I was more concerned with the lace than the hem) and Tracy said she had given the dress to Rachel to alter, despite the fact I have never had any dealings with Rachel before. Tracy admitted this shouldnt have happened and offered to fix the lace for me (again, implying SHE was going to do it). We picked up the dress after a month (Tracy happily said: Yes! Its all fixed for you!) and immediately noticed that it was significantly lighter than when we dropped it off. Upon checking, I had a massive meltdown because 1. She did not fix my dress, 2. A layer of the underskirt was missing.When my husband called Tracy about the missing underskirt, she said Lisa told me to remove it and asked us to drop in when we denied this completely. This phone call, and the subsequent meeting, was recorded on our phone as a friend had mentioned Tracy had also taken a layer of her skirt without permission or consent. (we mentioned this to Tracy and she blamed her husband for it. This is not true, as the email thread was with Tracy) When we saw Tracy the next day, she simply said I had removed an underskirt but that was another Lisa. She then claimed my dress did not have an underskirt, and when confronted, told me I was probably wearing a detachable one. When asked why the lace was untouched, she tried to blame Rachel again (Rachel was there and denied this) but then admitted: We are busy and have many dresses come in. Sometimes it happens. - horrible excuse for a business.I had spoken to Citizens Advice who told me I had to be given a full refund as a MINIMUM but when I asked Tracy for it, she got very defensive and said Im not going to give it to you. When I told Tracy I had already spoken to my bank and they agreed to pursue my case, she reluctantly gave me my refund and rudely said I am very angry right now. The bridal shop has confirmed in writing that the underskirt stitching has been tampered with so either Tracy is lying, or somebody with access to her shop has stolen the skirt (it was a £800 designer dress). She completely denies this, of course. The second to last photo shows the tampered part of the dress. I have also attached in the last photo my friends dress to show that her hem was uneven as well. Tracy does not take responsibility for mistakes and always tries to blame others before she gets caught out. Utterly appalling tailoring and even worse customer service.

Amazing! I arrived completely disheartened about my wedding dress, however, I was made to feel at ease. Nothing was too much trouble and I have left feeling like I am not settling for a dress (long story) and in fact getting the dress I always wanted. Nothing was too much effort. We seemed to be on the same page about what was right for me. I recommend to everyone in need of a seamstress, and cant wait for my first actual fitting. I also liked that the quotes were transparent and I was given honest opinions, which I needed. Made me feel better about the whole decision process! Also love the little freshen up details in the fitting room...perfect for when you decide to go on the hottest day of the year lol!

This was my first and last experience here, refund was given however the material is totally pulled on my sons new school trousers. They were £17.00 a pair I cant afford another 2 pairs so had no choice to make do with what we had left of them. They were not even overlocked so any stitching would have come undone in the wash.

I dont usually post reviews but I am extremely disappointed with the lack of customer care at this place. If you are looking for VERY BASIC alterations, this is your place. Anything more than resizing a jacket, they will ruin your clothing completely. Tracey will tell you she has the skills to alter expensive clothing but she simply doesnt. I wish I read the negative comments here sooner.

Had a suit altered. Extremely helpful, friendly staff. Would definitely have more work done there. Very happy with my suit.

Amazing staff, Tracey knows what shes doing, and how shes doing it. The pride she takes in her work is second to none, and it shows as her work is exquisite. Ive had a few items fixed/adjusted now, and each time the service has been faultless. Probably the best seamstress in South East Kent

Not just good service at a reasonable price, but expert advice too.Tracey can be relied on to suggest the best way to get the right result, even when thats not the most obvious solution. She will equally be upfront if a repair is not going to work even if that means they are turning down work!

If I could give these guys six stars, I would. Every time I have asked them is it possible? they say, yes! They worked on my daughters wedding last year and every job was impeccably completed and delivered with a smile. They are my go-to miracle workers and we would have no hesitation in recommending Acula.

Had a wedding dress that needed to go from a size 14 to a size 8-10 and they did it perfectly!!! Tracy and Rachel are really helpful and friendly!!! Would definitely recommend!!!

Very helpful and efficient service. Fixed my partner’s jacket very quickly as we needed it for a trip, would recommend!

Dropped in son’s school trousers for alteration. Can’t fault the speedy service but the quality of stitching was poor and the fabric had been pulled too tight. I wouldn’t use them again.

Very nice people.So friendly and welcoming.So far I am very happy about the service.

Such good service! Would recommend.

DO NOT TRUST THIS BUSINESS!!!!!! She hasnt got a clue.. she completely ruined my brand new dress that cost £300.. it came back absolutely reeking of cigarette smoke that even dry cleaning couldnt get rid of..not only that, she made a terrible job of the alterations! where I had to have them completely re done...will be reporting to trading standards.

Well done to Tracy at Acula Creations, not only friendly but a professional service, highly recommended for all your tailoring needs.Excellent well done!

One word amazing, amazing at what they do and their passion in what they do, they treat u like family, just amazing

Stay well away total disaster .had for 2 wks .and was still sewing when we went to collect .the suite went in with small problem came bk with an item that was not finished,.seems coming undone and a total mess. Only fit for the bin.They new this was a mess as to add insult to injury they asked if we wanted them to throw it away.My daughter was in tears as wasted 2 wks and got no suite and only 2 wks before wedding. I would give them minus 5 stars if i could.

Wonderful service at a great price.

Can not rate them highly enough!!!